Brother of Ralph Anthony Dopping-Hepenstal, on behalf of banks administered estates and was central to many evictions in Longford. Remembered as “Jimmy Dopping” in North Longford, as “Uncle Jemmy” among his own family.

Was agent to the Laois landowner “Black Jack” Adair who bought an estate in Donegal, and the evictions of the McGlinchys and other families up there. Also

Not a very nice chap at all!

Stabbed to death by a tenant. 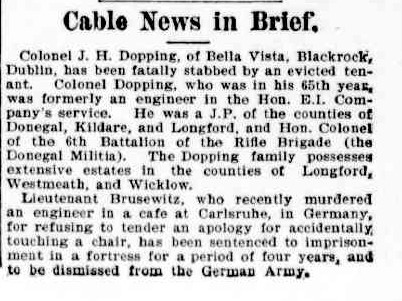 How to Lose Friends But Make Money

In a new book out in Offaly. his investment in Farrellys in Tarraun (outside Pullough in Offaly) business made him a lot of money. When it was destroyed, Dopping took over the liabilities and put Farrelly working on it, but then copped that a commission Farrelly was earning was making him a lot of money. He overrid that business arrangement, leading Farrelly to give up an emigrate.

Local opposition meant Dopping had to give up the enterprise which was the first commercial exploitation of an Irish bog, and a direct forerunner of Bord na Mona.

Farrelly himself was from the North Longford / Cavan / Meath area.