Tom Reilly was my grandmothers brother, a soldier of fortune.

Luck of the Irish! 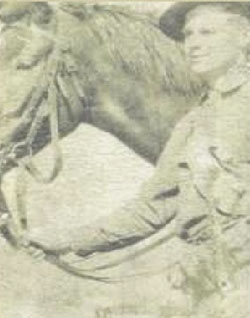 This is the only photograph we have of my grand-uncle Tom Reilly.

He was in WW1 in the US calvary, from which we have a postcard picture. He escaped unhurt bar for after action while marching he noticed his foot wet. Taking it from his boot, he found he was hit by shrapnel, the boot was full of blood.

The luck of the Irish!

Reilly and the Rhinemaiden: an unknown love story

He got in with a German girl in the Rhineland, and they had two kids. Family stories say they were twins. She died in childbirth.

He gave the twins to her parents – shopkeepers – to rear, he went back to America.

They very well could have fought against him and for Hitler in WWII.

Once a soldier… but Irish luck runs out…

He was my mothers godfather when she was born in 1934. He went back to England, and for WWII he signed up to the British Army.

It wasnt popular to do, so what unit we dont know.

He was in the Dunkirk landings, losing his arms and legs. He spent his life in military hospital, dying of TB in 1953.

A Hero who fell too late…

In 1953 it was not good to have a British Army funeral or pension in rural North Longford, especially hot areas like Colmcille.

In fairness to the UK government, they wanted to repatriate the body at no cost, pay for a military funeral, and pay Toms pension to his next of kin, my grandmother. But taking the Queens schilling was too risky, the telegram was ignored.

Where we was buried, we do not know.