* WIKISOURCE
* The Baronetage and Knightage” By Joseph Foster – Page 475 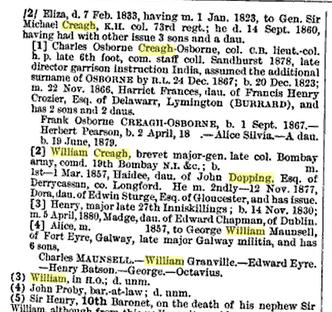 General Creagh was twice married: (1) on 29 April 1857 to Haidée Sarah Rose, daughter of John Dopping, of Derrycassan, co. Longford, by whom he had five sons and two daughters; (2) on 10 November 1877 to Dora, younger daughter of Edwin Sturge of Gloucester, by whom he had one son and two daughters. The four sons who reached manhood all entered the army. The eldest, Ralph Charles Osborne, served with distinction in Burmah, in Manipur, at the relief of Chitral, in the Kurram Valley, and in South Africa, and died at Netley on 27 Jan. 1904.